So you want to take dynamic portraits outdoors but you don’t want it to be a huge production with a lot of lighting gear, assistants, etc. Not a problem.

These days, it doesn’t have to be a huge production in order to achieve well-lit portrait shots outdoors. The main reason for this is that lighting equipment has come a long way over the years: it’s a lot more portable, a lot more affordable and a whole lot easier to use.

This lesson spotlights the new Photoflex® StarFire™ and FlashFire™ Kit in photographing outdoor portraits at dusk and demonstrates how valuable a little extra diffused light can be.

This lesson was shot in tandem with another PLS lighting lesson, Improving Action Shots with Portable Lighting, where I wanted to shoot some basketball action shots at dusk. For this lesson, though, I wanted to capture some portrait shots on the court with the dusk light in the background. I asked my assistant, James, if he would both assist and model for me, since he’s such an avid basketball player as well as a photographer. He agreed, and the next afternoon we met up at a basketball court in Portland, Maine’s east end.

After carrying the lighting gear over to the side of the court in a GigBag™ earlier in the afternoon, James grabbed his basketball and took a few shots to get warmed up for the first lesson. As he did, I took a few shots of my own to get a sense of how the light would be on him. As you can see, I could either expose for the sky or James, but not both. [figures 1 & 2] 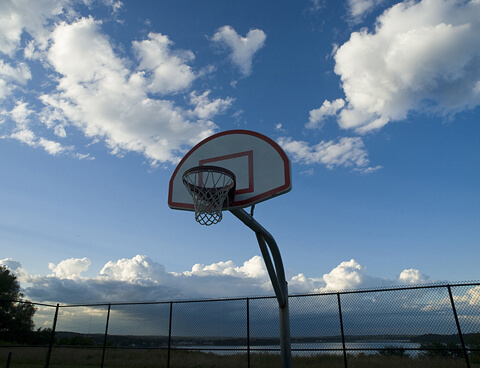 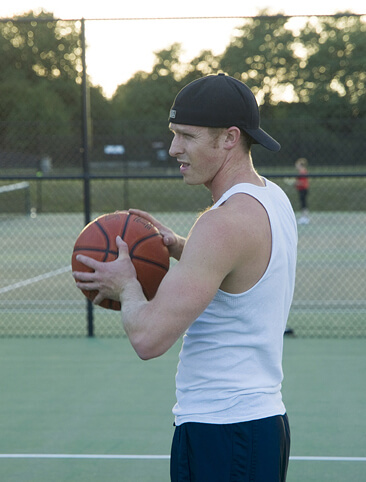 Mounting Light to a Camera Bracket

After we shot the first lesson, I decided to mount the Extra Small LiteDome® Kit I’d been using to a camera bracket and shoot James from a few different vantage points on the court.

After mounting the camera to the bottom end of a simple camera bracket, I attached a ShoeMount MultiClamp to the top end of the bracket. [figure 3] 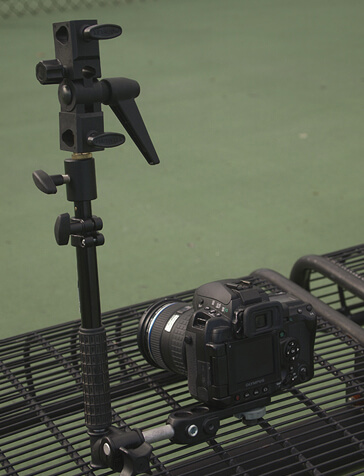 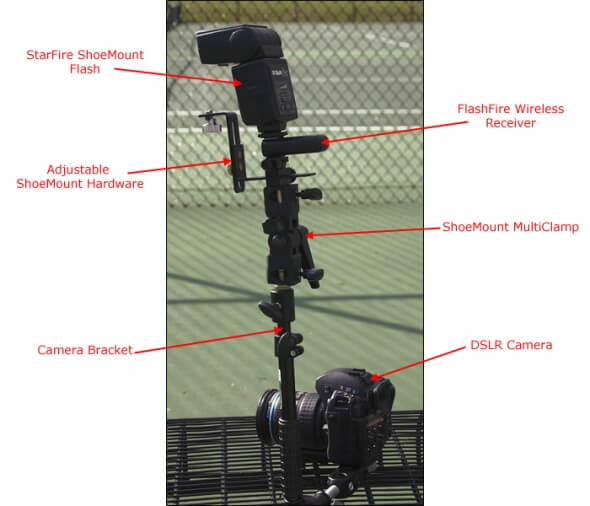 Once the Extra Small LiteDome was set up, I mounted the bottom side of the Connector to the ShoeMount Adjustable Hardware and adjusted the Hardware so that the Flash was optimally positioned to project light through the Connector and into the LiteDome. [figure 5] 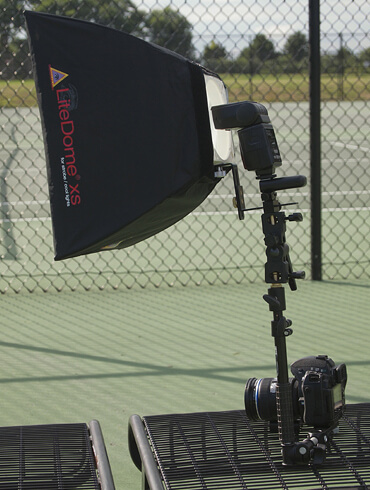 I then Velcroed the back flap to the back of the Extra Small LiteDome to prevent any potential light spill from the flash. With everything attached, I powered up the flash, set it to about 1/2 power, and powered up the wireless receiver.

To sync up the camera with the flash, I mounted the wireless FlashFire transmitter to the hot shoe of the camera and tested the connection. I was now ready to shoot. [figure 6] 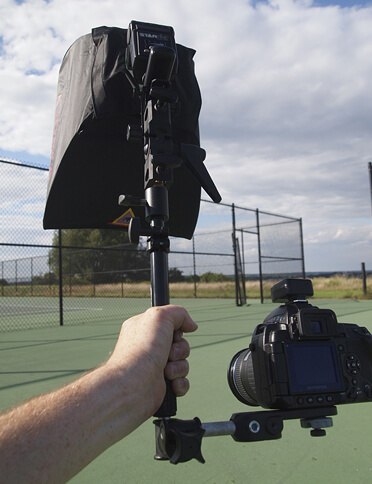 Soft Light on the Go

The nice thing about having the SoftBox mounted to the camera bracket is that it stays with you wherever you go, negating the need for a LiteStand or assistant. And although you’re somewhat limited to the positioning of the light since it’s mounted to the camera, its top-angle position works quite well for most portrait shooting.

Here, I raised the light up on the riser of the camera bracket a little and angled it down slightly by adjusting the ShoeMount MultiClamp. [figure 7] 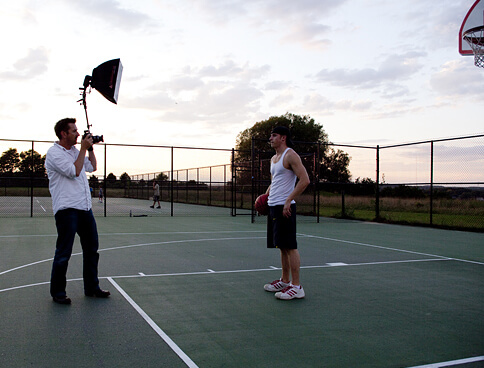 Once I had everything dialed in, I took a few shots of James with the net in the background. Below is one from that series. [figure 8] 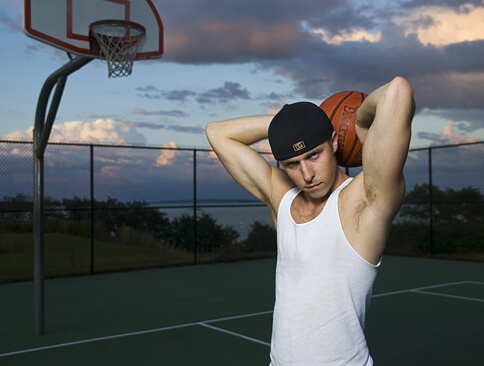 As you can see from the result, I was able to expose well for both James and the sky.

Next, I decided to come in a little tighter and re-frame to have James and the net somewhat closer together. [figure 9] 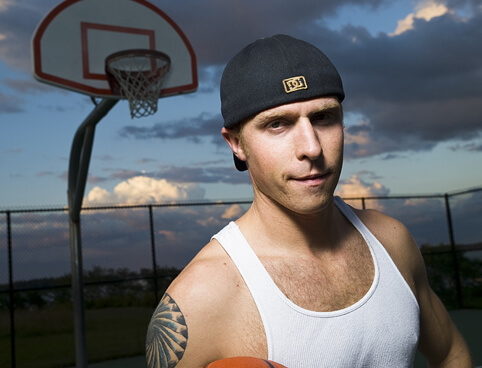 In reviewing the result, I saw that the light from the SoftBox was positioned a little too high, as James’ left eye was deep in shadow. I could have lowered the SoftBox on the riser somewhat, but instead, I decided to crouch down for a lower vantage point. In addition to having the light in a better position, this lower angle would also render James as more domineering, which was ideal for a portrait like this. [figures 10 & 11] 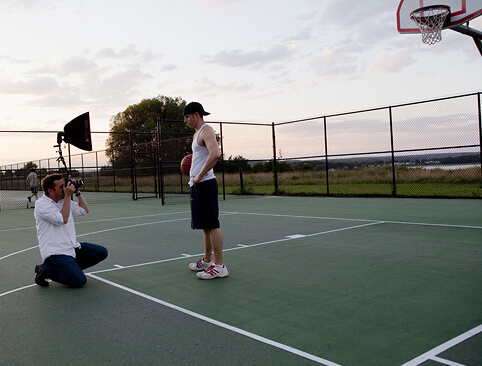 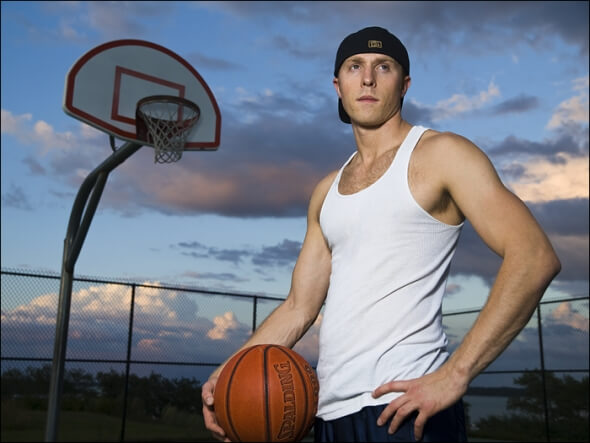 As the light started to fade, I thought it would be good to shoot some more shots of James against the setting sun. I stayed near the widest end of my 12mm-60mm lens for a somewhat optically distorted effect and kept shooting from a low angle. [figures 12 & 13] 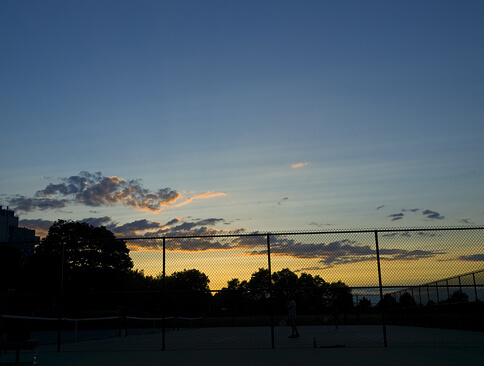 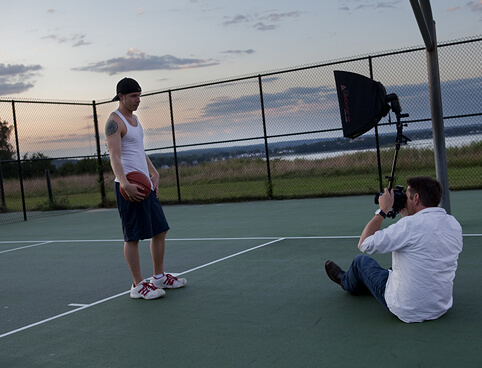 Here’s one of my favorites from that series. As you can see, the light from the Extra Small LiteDome rendered James in a natural, yet dramatic way against the backdrop of basketball court and sky. [figure 14] 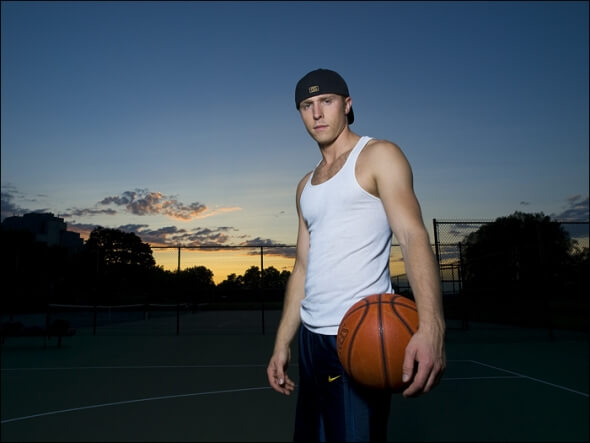 In the side-by-side comparison below, you can see how much the Extra Small LiteDome provided for this portrait. [figure 15]

To further take advantage of the wide angle setting, I had James move around a bit with the ball as though I were his opponent while I took a final series of shots. Here’s one of my favorites. [figure 16] 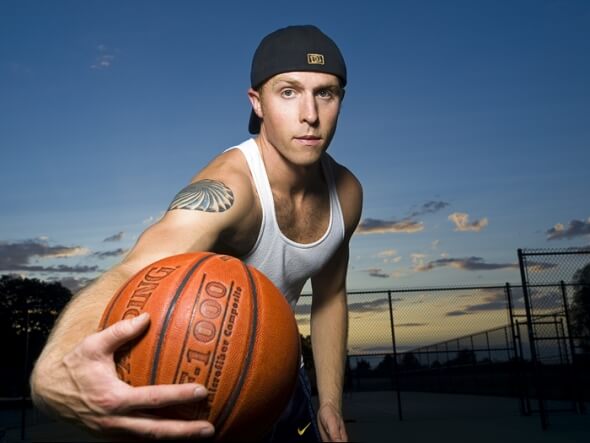 As you can see, these final results would not have been possible without this Extra Small LiteDome Kit. Having a little extra portable lighting like this gives you way more flexibility when it comes to outdoor portraits.

As always, remember to experiment with your lighting, and above all, have fun in the process!

Written and photographed by Ben Clay, contributing lesson writer for WebPhotoSchool.com® and Photoflex.com®.

Modeled and assisted by James Helms.