Leading the Cheer with Photoflex Gear!

Recently, Pro Showcase Photographers Alycia White and Benjamin Edwards teamed up to produce a lesson and video on some simple-yet-powerful indoor and outdoor lighting techniques.  Alycia shot indoors, while Benjamin shot out.  In addition to what you’ll find in the video, here’s what each of them had to say about their shoots.

A Classic Indoor Portrait
Alycia:  For this first shot, my goal was to light the model, Kelly, with a clean, crisp light.  I used a three point lighting technique with the Photoflex FirstStudio Portrait Kit.  I placed one umbrella to camera left as a main light (about three feet away) and another umbrella to camera right (about four feet away) to serve as a fill.  Then, I added a third umbrella behind and to the side of Kelly to add a lovely little rim light to separate her from the background. 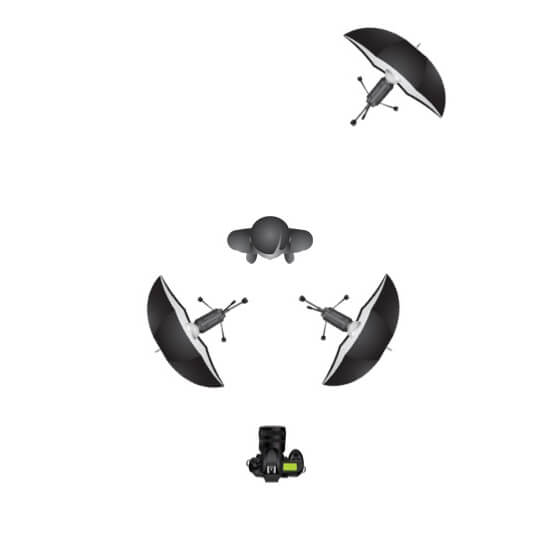 If I’m being honest, I really just wanted to show off Kelly’s adorable shoes in this image!  I was thrilled with how the constant lighting really made her skin glow.  Another great thing about the constant light was the fact that there was very minimal adjustments I had to do in camera.  I just set what I needed to and shot away! 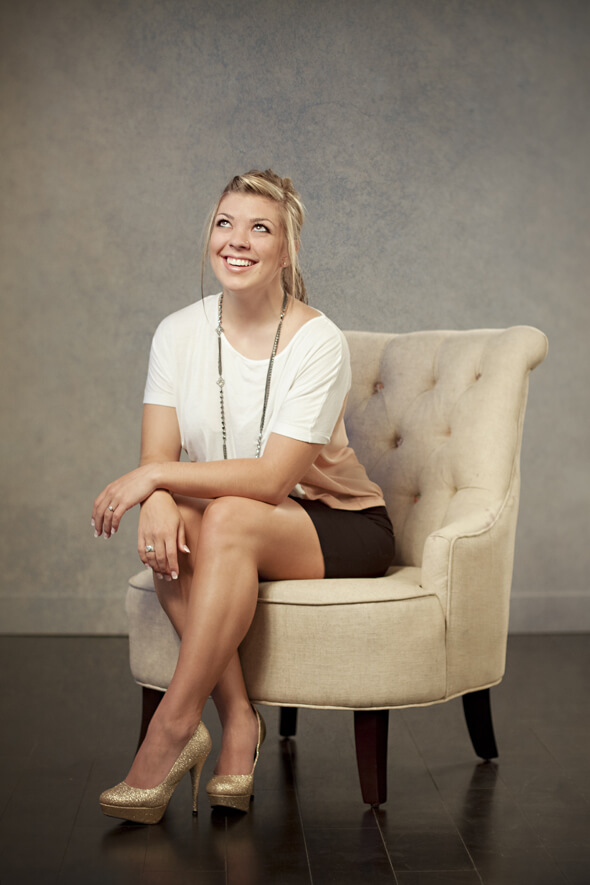 Something a Bit More Dramatic!

Alycia:  For this next shot, I took away the fill light from camera right and repositioned the main light to come directly from the side of Kelly on camera right.  This created more shadows on the opposite side of Kelly’s face, offering a much more dramatic light.  I also removed the umbrella in the back and replaced it with a speedlight directly behind the model.  I wanted this rim light to be BOLD and explosive, as if the model were walking through a really bright light. 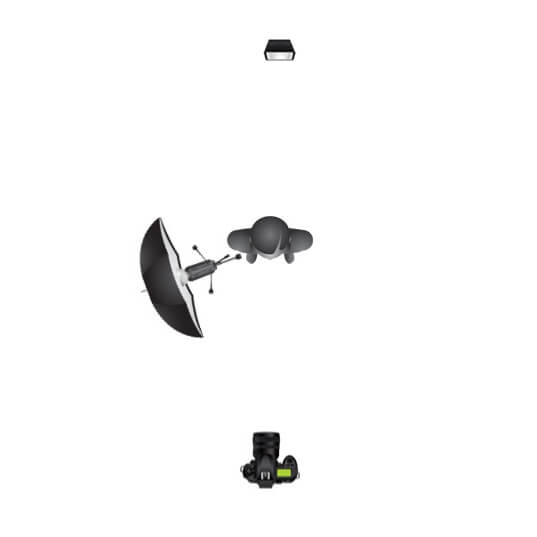 It’s important to keep in mind that the exposure of the flash in camera is controlled by the aperture and that the shutter speed controls the exposure of the continuous ambient light. Because my main light was continuous, I set my shutter speed according to how I wanted her face to be lit and then set my aperture according to how I wanted the speedlight in the background to be exposed.  My favorite thing about this scenario was how easily I could get two totally different looks simply by adding a speedlight to the FirstStudio Kit! 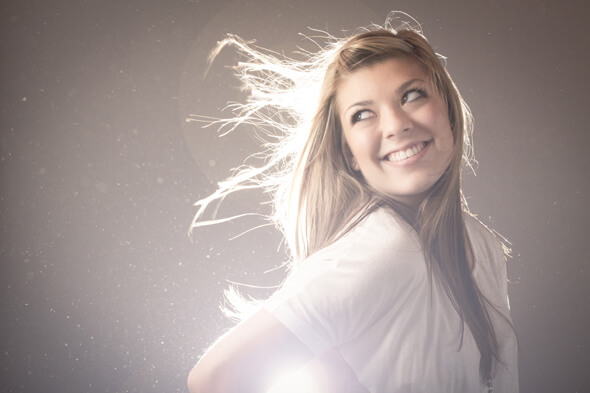 Benjamin:  After Alycia’s indoor shoot, I decided to head outdoors and shoot in an alleyway just downstairs from the studio.  This would give me the chance to capture Kelly showing off her huge hops.  While I vowed never to shoot someone against a brick wall again, it’s what we had to work with, given the time constraints of the day.  Sometimes you make do, right?

I hadn’t actually planned on having her leap off of something until I saw some school desks that a nearby coffee shop had placed in the alley for people to use while they enjoyed their brew.  Once I had the idea set up and everything placed, I figured out how to light it.  This isn’t how I always work; sometimes I see the light first and then decide what to do with it.  Having the proper lighting tools on hand allows me to work either way.

The light in the alley was tricky – half shade, half bright sun.  I knew that by using high speed sync, I’d be able to use a shutter speed that would darken the ambient sunlight and allow my speedlight to be the dominant light source in the scene.  I was shooting at f/2.8 to allow for (dangerously) shallow depth of field and increase the sensor’s sensitivity to the main light source. 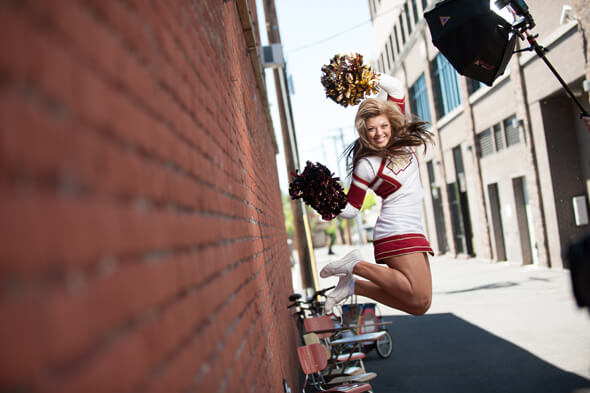 My go-to light modifier for my speedlights, as well as mono lights, is hands down my Photoflex Extra Small OctoDome. This box is 1.5 feet in diameter and I use it for just about everything.  To get the OctoDome and speedlight in the right place, I used a super versatile tool from Photoflex, the LiteReach.  Simply put, the LiteReach helps you get your light where you need it to be without the weight of trying to lift an entire stand and hold it in position.  My assistant was thankful for a “lighter” approach!

Placing the OctoDome at roughly a 45-degree angle, feathered toward the wall a bit gave me the lighting look I was going for.  After a few jumps, we had the right expression, and BAM! FINI! 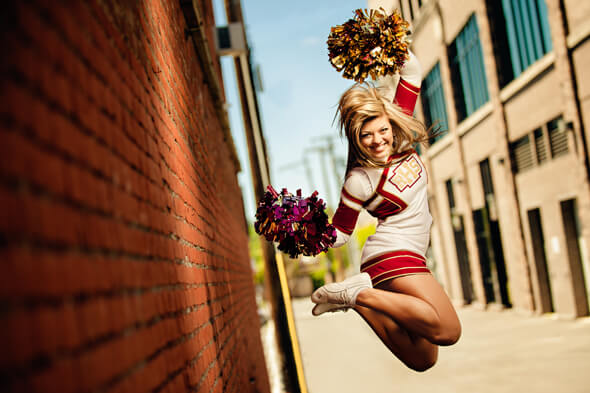 Another Brick In The Wall

Benjamin: This was essentially the same setup as with the jump.  Did I mention that this setup is versatile?  After we nailed the jump shot, I had Kelly do a quick wall lean for this portrait.  With the OctoDome feathered, I had the super soft light I was looking for.  The LiteReach made it super simple to position the light.  And with the foot attachment spread out, we could set the LiteReach and OctoDome down in between shots to give my assistant a break.  Not that she needed it – she’s buff! 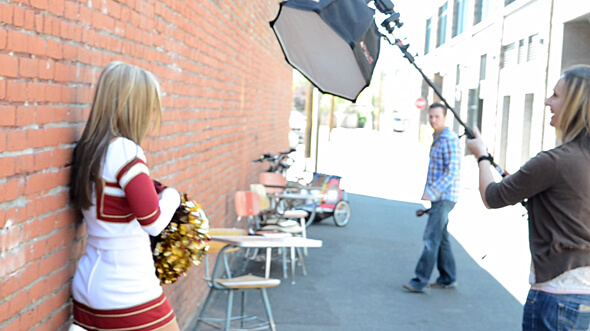 To sum it up, much of the time you need a modifier on your speed or mono light that gives you soft, pleasing light.  For two years, the Photoflex Small OctoDome and Shoe Mount Hardware have been my go to rig for wedding and portrait imagery because it’s easy to travel with, affordable, and stands up to everyday use.  I’ve now incorporated the LiteReach into my kit for the very same reasons. 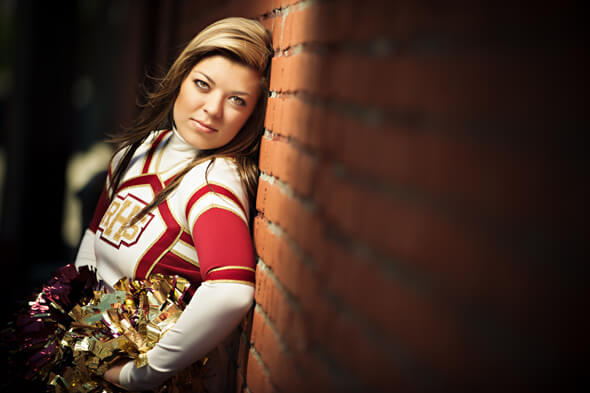 Written and photographed by Alycia White and Benjmain Edwards.  To see more of their work, click on the links below: